Side Effects of a Low Carb Diet 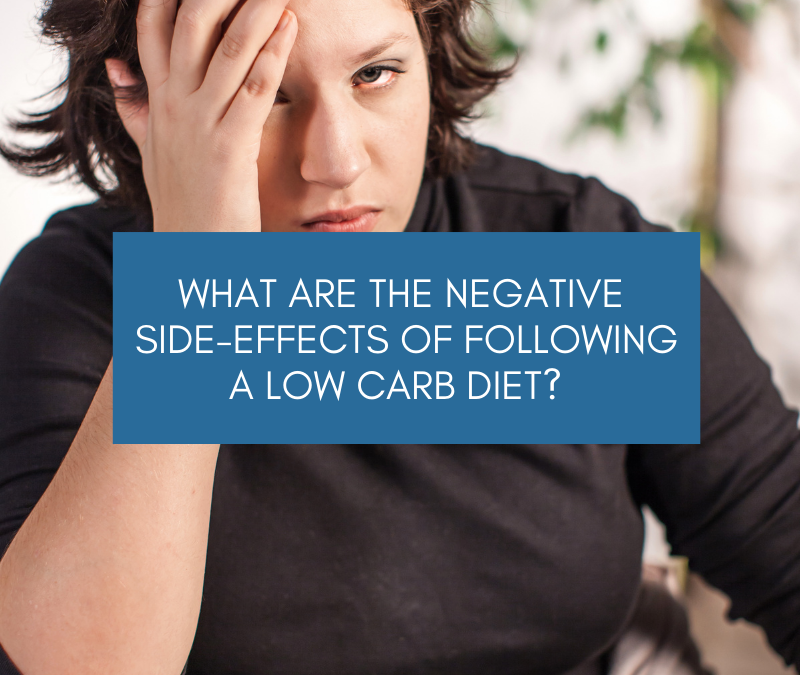 What are the Negative Side-Effects of Following a Low Carb Diet?

There are some side effects that are quite common during the first few weeks as your body adapts to a low-carb diet. These are usually nothing to worry about and tend to disappear after a week or two.

One common side effect of eating low-carb is a reduction in blood pressure. This is often a good thing for people who have concerning blood pressure levels and, if your doctor has put you on medication and you start to feel dizzy, this could be a sign that you need to lower your medication.

Seek your doctor’s advice so that they can monitor your blood pressure and reduce your medication as required.

Other short-term negative side-effects of following a low carb diet may include:

These symptoms appear because when you first start a low-carb diet, your body starts looking for glucose to burn for fuelling the body. As you are now getting very little from your diet alone, your body taps into glucose stored in the body in order to keep the normalisation of blood glucose levels. Cortisol and human growth hormones are also released.

It’s the cortisol, released by your adrenal glands that stimulate a process called gluconeogenesis, which the body starts to use to convert protein and fat into sugar. Cortisol, when released into the body, prevents cells from releasing sodium and accelerates the rate of potassium excretion and increased urine excretion. This can lead to all of the issues cited above.

Within a week, the body will usually adapt by being more efficient at burning fat for fuel. This is called ketosis. Ketosis helps to preserve muscle mass and glycogen when you create a deficit in carbohydrate intake.

Another reason why issues arise is because you can become quite dehydrated at the beginning of a low carbohydrate diet. Insulin not only lowers our blood sugar when it spikes after eating carb-rich foods, it also acts on the kidneys to promote sodium reabsorption. When you reduce insulin, you also reduce sodium reabsorption.

So, if you have symptoms like nausea, confusion, fatigue or headaches, add a little extra unrefined salt to your foods or stir some in a large glass of water with a squeeze of lemon juice.

If at any time you become concerned about your health following a low carb diet, it is wise to seek the advice of your medical practitioner.

When you're looking to substitute recipe ingredients for something from the wonderful abundance of bush foods in Australia. This guide will help you choose.

All the information on this site is intended for providing information only. It does not constitute medical or nutritional advice, is not tailored to any reader’s personal situation and readers should seek their own medical advice before making any decisions related to their nutrition and health.

Low Carb Australia is a participant in the Amazon Services LLC Associates Program, an affiliate advertising program designed to provide a means for sites to earn advertising fees by advertising and linking to Amazon.com